This review follows on from my review of the base game in the Memoir System. As such I will endeavor to analyze this expansion on its merits and then comment on what it adds to the Memoir ’44 system. I have owned this expansion for well over 12 months now so I have been patient in learning the game before getting this review to you (20 plays in all at this point). I hope it reflects my understanding of the 'Pacific Theater' and is of use to readers.

I’ll also highlight the fact that this review will not go into the basic game play of Memoir ’44. I have covered this in detail in the following review and I suggest you read that first if you are unfamiliar with the system - Memoir '44

The Pacific Theater is the second real expansion of note for Memoir '44 (I discount the Terrain Pack as a solid expansion at this point but will revisit it after the Air Pack is in my hands).

As the name suggests the Pacific Theater focuses on the battles that took place in the Pacific and in particular it highlights the key battles fought between the Imperial Japanese Army and the US Marine Corps. The scenarios cover the time period of ’41-’45 and follows the lead taken by the Eastern Front in departing from the time frame of the base game (I recognize that this also occurred in the Terrain Pack).

As one would expect the game offers a range of new figures, tiles and terrain, tokens and scenarios. But most importantly it offers new rules that alter the play.

Part of what makes Memoir stand out as a game, and Days of Wonder as a Company, are the great looking components that help one’s imagination run wild with possibilities. 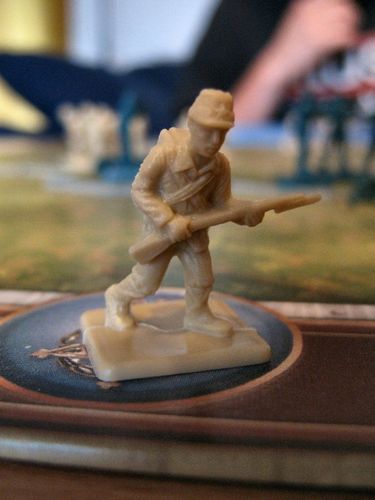 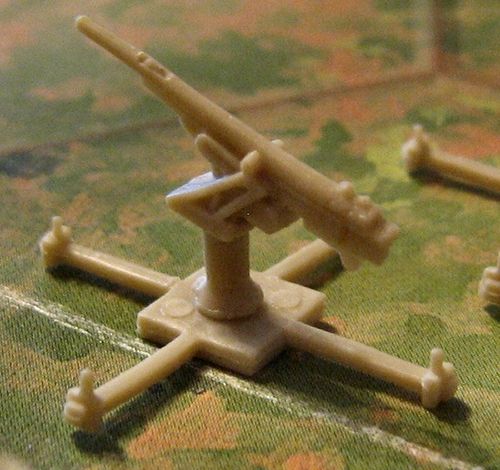 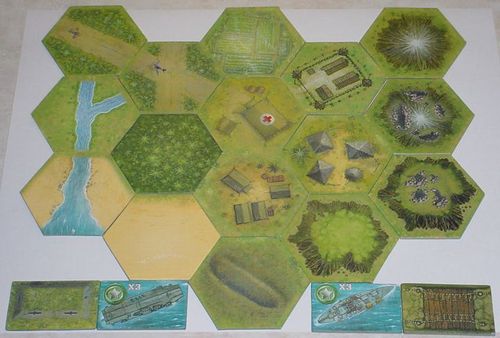 Beaches – These tiles now allow a scenario to have scattered beach placed on the all grass side of the board, or placed on the 'beach-head' side to extend a beach as required. The effects for these tiles are the same as regular beach outlined in the base game (link to review can be found at the bottom of this page).

Mountain Caves & Hill Caves – - The artwork here is functional. Mountains are depicted with a white star based center (presumably to represent snow) and holes to represent the dug-out caves. The Hill Caves are similar featuring cave holes with a hill based border. These tiles are double sided, with the reverse side featuring the underlying terrain with no caves (see battle below).

Movement – Only the Japanese can claim caves as a defensive position. Only infantry (either side) can enter cave hexes.

Line of Sight – A cave hex uses the same LoS rules as the underlying terrain.

Battle – The Japanese can move from any one cave hex to any other cave hex on the board, which requires all their movement points. They can still battle however after making such a move.

Allied Infantry may attempt to seal a cave hex by moving onto the hex in question. Attempting to seal a cave network is only possible if no enemy units are in adjacent hexes. If this is the case the unit can roll their Close Assault Dice (usually 3). If a 'Star' is rolled the cave network is sealed and the tile should be flipped to reflect that no caves are present in that location.

Mountains - These hexes are depicted as a dark center with a white star pattern emanating from the middle (presumably snow).

Movement – Only Infantry units may enter or exit a Mountain hex and they can only do so using an adjacent hill.

Battle – Infantry and Armor units suffer a -2 dice penalty when targeting a Mountain hex. This penalty is negated if the attacker is also on a Mountain hex that is part of the same Mountain Range. If on a different Mountain Range, they will still suffer the -2 penalty.

Artillery suffer no penalty for firing on Mountain hexes. If an Artillery unit starts the scenario on a Mountain hex (they only way they can be placed there) they can target up to 7 hexes away with the following dice: 3, 3, 2, 2, 1, 1, and 1.

Movement – All units that enter a Jungle hex must stop. They can still Take Ground after a successful Close Assault attack.

Battle – Units may still battle after entering a Jungle hex. Armor units are also free to Take Ground and perform an Armor Overrun Combat. Infantry suffer a -1 penalty to attack a unit in a Jungle hex and an Armor unit suffers a -2 penalty. Artillery suffer no penalty.

Rice Paddies – These tiles are represented by a series of green interlocking fields that are instantly recognizable.

Movement – An Infantry or Armor unit that moves into a Rice Paddy must stop and may not move further on that turn. A unit that leaves a Rice Paddy hex may only move to an adjacent hex. Artillery may not enter a Rice Paddy.

Battle – Infantry may attack out of a Rice Paddy. Armor units may not battle on the same turn that they enter or leave a Rice Paddy. If they Take Ground into a Rice Paddy after an attack, they may not Armor Overrun.

Line of Sight – No effect.

Fish Ponds – Rice Paddy tiles are used to represent Fish Ponds and the effects listed above hold true as well. The only change is that no unit may battle after entering a Fish Pond. Infantry can still battle after leaving them though.

River Mouth & River Branch – These tiles follow the same rules as River tiles from the base game. A link to that review can be found at the bottom of this page.

Hospital – This tile features several tents, with the largest identified with a Red Cross icon. Hospitals impart no movement or battle restrictions but they do block line of sight.

An injured unit can seek treatment if it starts its turn on a Hospital Hex and there are no enemy units on adjacent hexes. To attempt to heal the unit, an order must be issued to the unit in question and 6 dice are rolled. Each icon that matches the unit's type will result in an injury being healed, up to the units maximum figure total. Only infantry can be healed in this fashion and a healed unit cannot move or battle for the remainder of the turn.

HQ-Supply Tent – These tiles are represented with several tents pitched in close proximity. HQ-Supply Tents impart no movement or battle restrictions but they do block line of sight.

HQ-Supply Tents create a 'problem' for the player that owns them as they cannot let them fall into enemy hands. If your HQ-Supply Tent should fall to the enemy, they can immediately draw a card from your hand and discard it. Until you are able to recapture it, you must play with 1 less Command Card than you started with.

The inclusion of HQ-Supply Tents can really add a new strategic dimension to a scenario.

Labor Camps – Act as Towns and Villages from the Base Game. See my original review for details (link at bottom of review).

Pacific Village – Act as Towns and Villages from the Base Game. See my original review for details (link at bottom of review).

Pier – These tiles depict a Pier and lead from a beach hex into an ocean hex. Units can only enter a Pier from the land/beach side. There are no battle or LoS restrictions.

Trenches – The artwork on these tiles depict a green elliptical shape, which are not entirely convincing as Trenches.

Movement – Infantry and Armor must stop when entering a trench and Artillery cannot enter trenches at all.

Line of Sight – No effect

Battle – Infantry and Armor that attack a unit in a trench suffer a -1 dice penalty. Armor may not battle when in a trench. An Infantry unit in a Trench may ignore the 1st Flag rolled against it.

Tokens - The Pacific Theater offers a good number of new tokens and badges that cover everything from Flame Thrower units to Rope Bridges and a wide variety of Insignia Badges for special units. The more interesting ones will be covered under the Unique Game Play Section below. 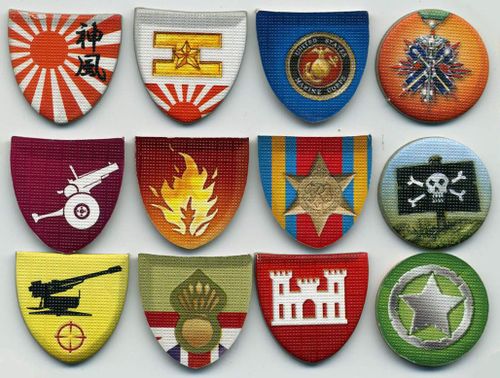 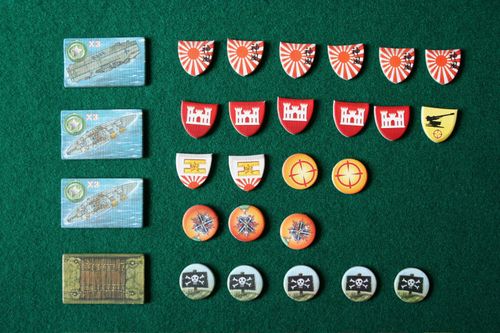 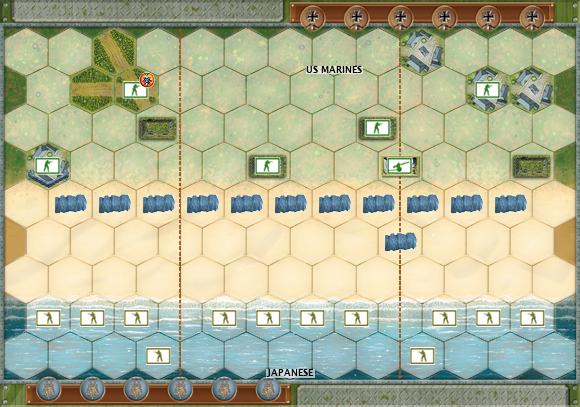 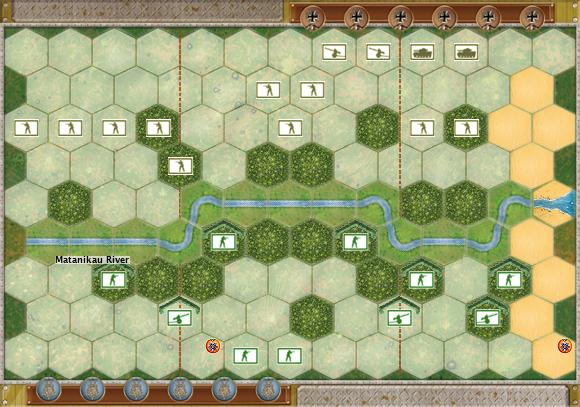 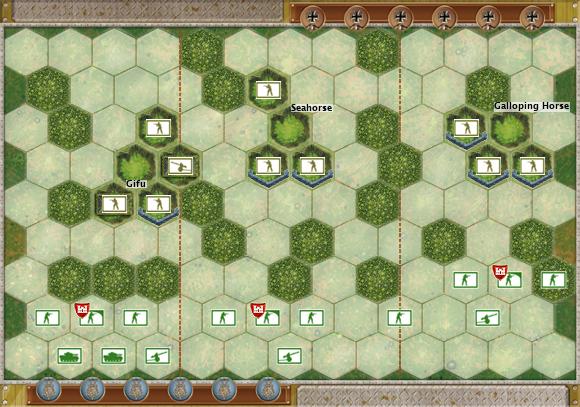 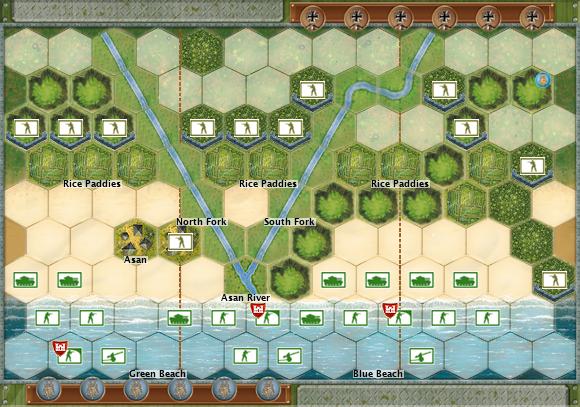 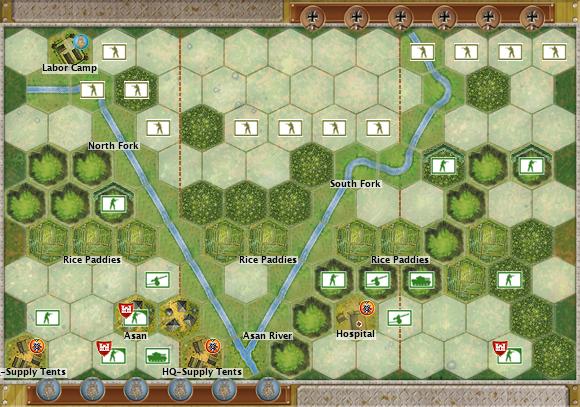 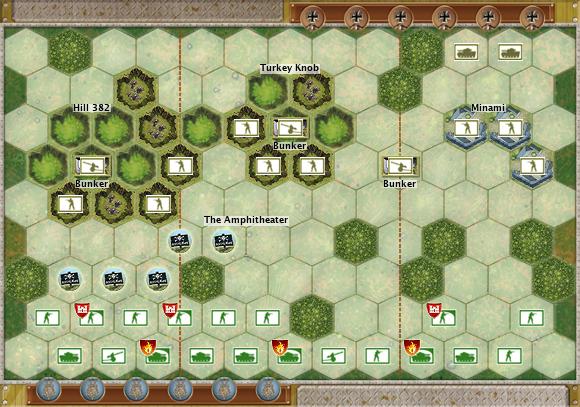 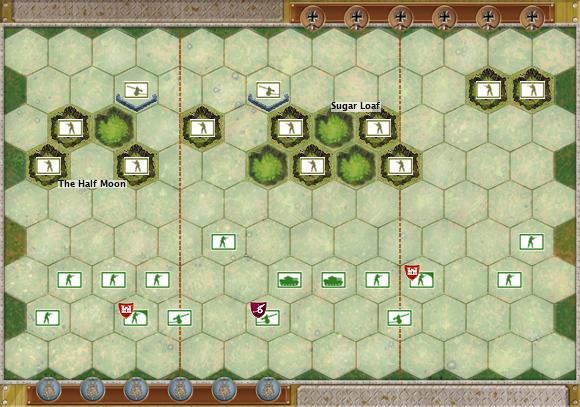 This expansion is a welcome addition to the Memoir System, offering something new to what has come before it and providing scenarios that are tense and enjoyable.

However it does fall a little short of the heights set by the Eastern Front Expansion. Whilst the Command Rules for both sides are interesting they still don't feel as ground breaking as those used by the Russians.

I also feel that this expansion has a much higher 'difficulty factor' for less experienced Memoir players. The Japanese Command Rules can be highly effective but significant skill is required to plan attacks carefully and manage one's hand efficiently, if those rules are to be exploited to their maximum. This I think accounts for the lower number of recorded battles for Pacific Theater scenarios (apart from being released later than EF) and the higher than expected US victories.

But what keeps this expansion from being a 'must buy' for all but Memoir Fans is the fact that many of its cool features and additions are used too sparingly. Many of the units and terrains are lucky to feature in more than 1 scenario and this is highlighted by the Night Attack Rules. These are a really neat mechanic but to feature in only 1 scenario (historical limitations or not) is disappointing.

With all that said I think this is a good expansion, even if it feels more like a tool kit in some respect.

If you are a Memoir fan however, then the Pacific Theater is still a 'must have'. I just think it suffers a little from following the Eastern Front Expansion.

Time for the Pro's and Con's -

Think Fresh - This expansion is fresh offering something significantly different from what has come before it.

Modified Game Play - It doesn’t stop at offering new tiles and units, it adds new rules that change the nature of each player’s strategic thinking. Hand management becomes tougher still and the ability to read the intentions of the enemy becomes paramount when playing the US Marines.

Authentic - The scenarios reflect the nature of the battles in the Pacific. The fighting was fierce and the battles bloody.

Epic - With five Victory Conditions demanding 6, 6, 6 and 7 Medals for victory, Pacific Theater allows for engagements that allow for changes in fortune. Not only is the death count high here but it also allows for one and maybe two tactical errors without necessarily meaning certain defeat!

Tension - Pacific Theater allows for a period of lull before the storm. This often occurs as the Japanese player must carefully wait for the right moment to strike. Hand Management and maneuvering your troops is key to playing the Japanese